Public consultations and policymaking in Serbia 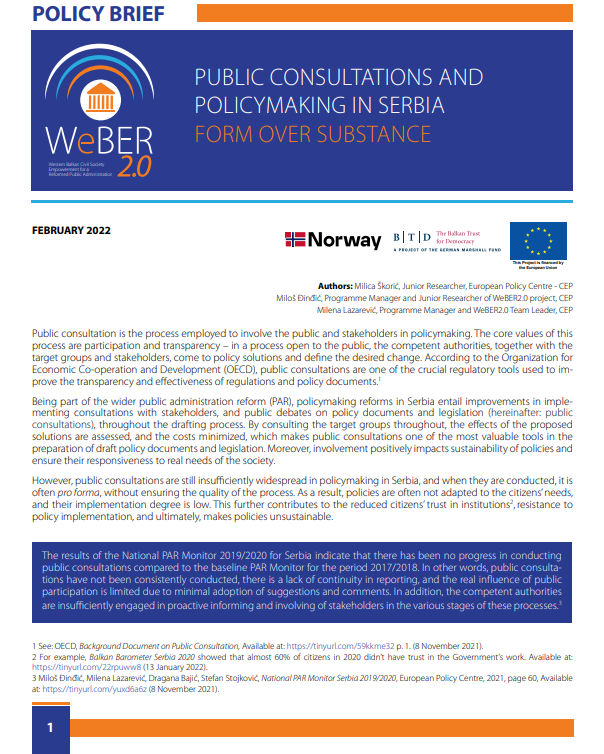 Being part of the wider public administration reform (PAR), policymaking reforms in Serbia entail improvements in implementing consultations with stakeholders, and public debates on policy documents and legislation (hereinafter: public consultations), throughout the drafting process. By consulting the target groups throughout, the effects of the proposed solutions are assessed, and the costs minimized, which makes public consultations one of the most valuable tools in the preparation of draft policy documents and legislation. Moreover, involvement positively impacts sustainability of policies and ensure their responsiveness to real needs of the society.

However, public consultations are still insufficiently widespread in policymaking in Serbia, and when they are conducted, it is often pro forma, without ensuring the quality of the process. As a result, policies are often not adapted to the citizens’ needs, and their implementation degree is low. This further contributes to the reduced citizens’ trust in institutions[2], resistance to policy implementation, and ultimately, makes policies unsustainable.

The results of the National PAR Monitor 2019/2020 for Serbia indicate that there has been no progress in conducting public consultations compared to the baseline PAR Monitor for the period 2017/2018. In other words, public consultations have not been consistently conducted, there is a lack of continuity in reporting, and the real influence of public participation is limited due to minimal adoption of suggestions and comments. In addition, the competent authorities are insufficiently engaged in proactive informing and involving of stakeholders in the various stages of these processes. 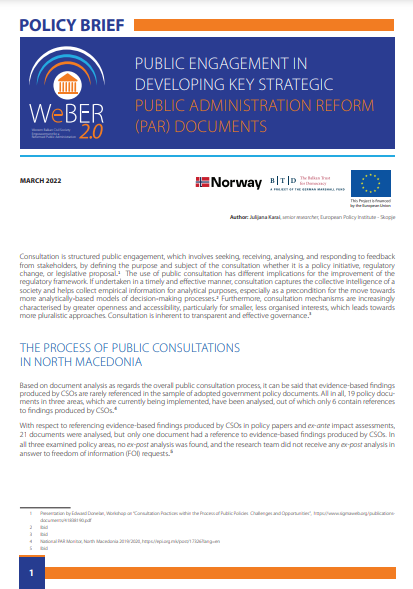 Consultation is structured public engagement, which involves seeking, receiving, analysing, and responding to feedback from stakeholders, by defining the purpose and subject of the consultation whether it is a policy initiative, regulatory change, or legislative proposal.

The use of public consultation has different implications for the improvement of the regulatory framework. If undertaken in a timely and effective manner, consultation captures the collective intelligence of a society and helps collect empirical information for analytical purposes, especially as a precondition for the move towards more analytically‐based models of decision‐making processes. Furthermore, consultation mechanisms are increasingly characterised by greater openness and accessibility, particularly for smaller, less organised interests, which leads towards more pluralistic approaches. Consultation is inherent to transparent and effective governance.

In North Macedonia, based on document analysis as regards the overall public consultation process, it can be said that evidence-based findings produced by CSOs are rarely referenced in the sample of adopted government policy documents. All in all, 19 policy documents in three areas, which are currently being implemented, have been analysed, out of which only 6 contain references to findings produced by CSOs. 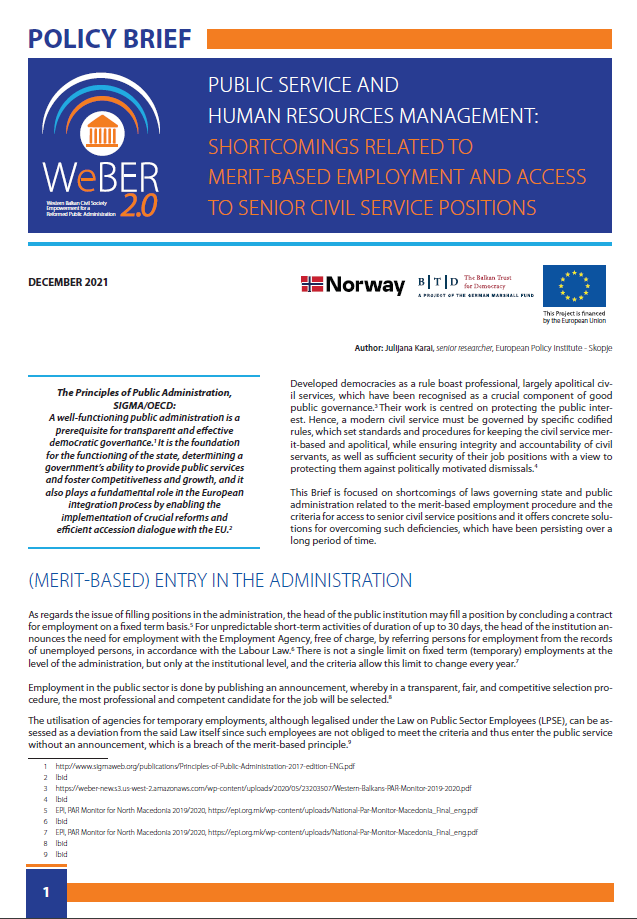 Developed democracies as a rule boast professional, largely apolitical civil services, which have been recognised as a crucial component of good public governance. Their work is centred on protecting the public interest. Hence, a modern civil service must be governed by specific codified rules, which set standards and procedures for keeping the civil service merit-based and apolitical, while ensuring integrity and accountability of civil servants, as well as sufficient security of their job positions with a view to protecting them against politically motivated dismissals.

This Brief is focused on shortcomings of laws governing state and public administration related to the merit-based employment procedure and the criteria for access to senior civil service positions and it offers concrete solutions for overcoming such deficiencies, which have been persisting over a long period of time.

The Brief can be downloaded here (in English).

Addressing the lack of open data in Bosnia and Herzegovina 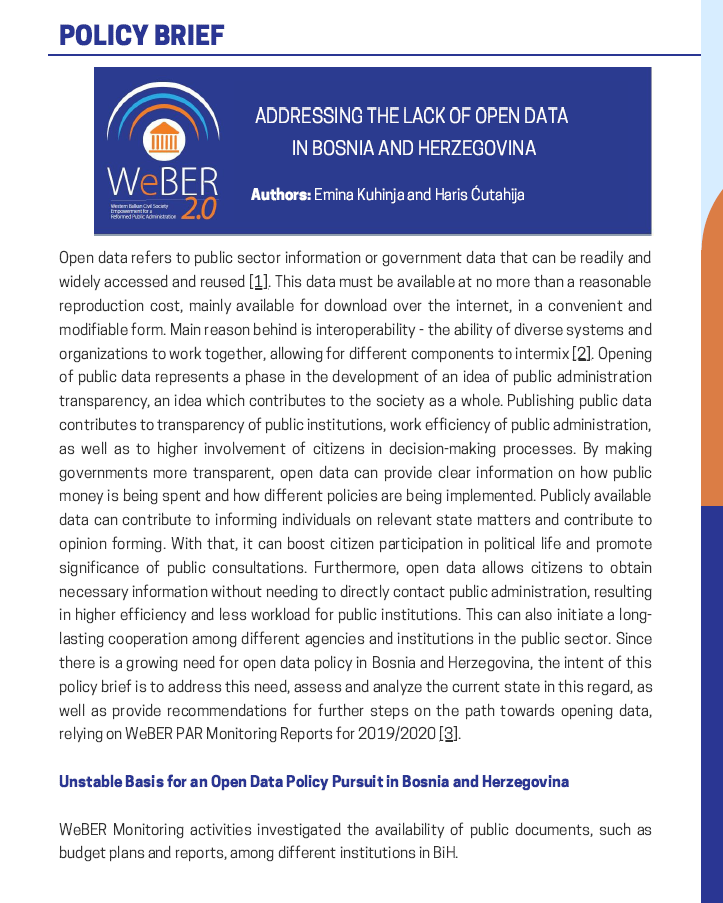 Open data refers to public sector information or government data that can be readily and widely accessed and reused This data must be available at no more than a reasonable reproduction cost, mainly available for download over the internet, in a convenient and modifiable form. Main reason behind is interoperability – the ability of diverse systems and organizations to work together, allowing for different components to intermix. Opening of public data represents a phase in the development of an idea of public administration transparency, an idea which contributes to the society as a whole. Publishing public data contributes to transparency of public institutions, work efficiency of public administration,as well as to higher involvement of citizens in decision-making processes. By making governments more transparent, open data can provide clear information on how public money is being spent and how different policies are being implemented. Publicly available data can contribute to informing individuals on relevant state matters and contribute to opinion forming. With that, it can boost citizen participation in political life and promote significance of public consultations. Furthermore, open data allows citizens to obtain necessary information without needing to directly contact public administration, resulting in higher efficiency and less workload for public institutions. This can also initiate a long-lasting cooperation among different agencies and institutions in the public sector. Since there is a growing need for open data policy in Bosnia and Herzegovina, the intent of this policy brief is to address this need, assess and analyze the current state in this regard, as well as provide recommendations for further steps on the path towards opening data,relying on WeBER PAR Monitoring Reports for 2019/2020.

Proactive transparency and the right of access to information 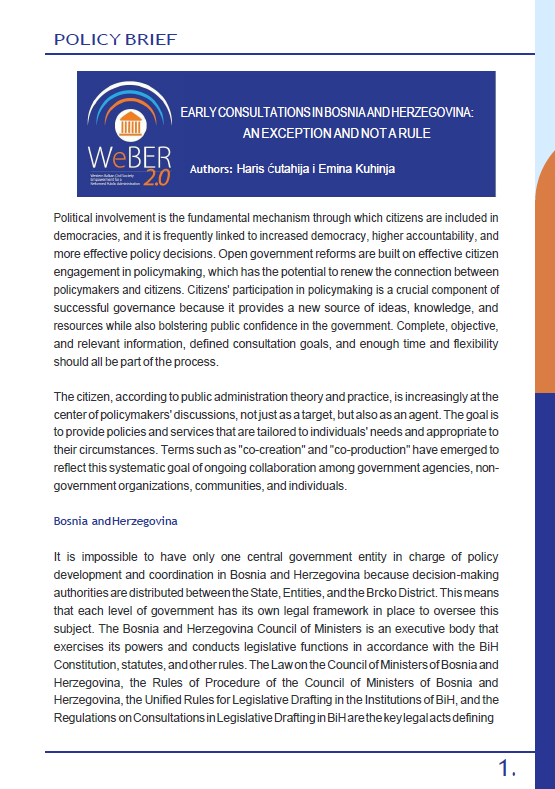 Proactive transparency and free access to information characterize democratic societies, introducing the order of a country to ensure transparency of the work of its administrative structures. These structures need to provide a basis for initiating communication between institutions and citizens. Communication rests on reactive transparency of the administration and its pursuit of the Freedom of Access to Information Act. Upon this Act, citizens are to receive information upon request, while the administration published specific information on its own initiative for the purpose of informing the citizens of its work, on their rights and obligations, or to involve citizens in decision-making processes pertaining to laws, policies, actions and other. This communication takes place on different levels and through various channels, and the development of new technologies and wider use of internet platforms and social media opens opportunities for new ways of involving the citizens.

Early Consultations in Bosnia and Herzegovina

Political involvement is the fundamental mechanism through which citizens are included in democracies, and it is frequently linked to increased democracy, higher accountability, and more effective policy decisions. Open government reforms are built on effective citizen engagement in policymaking, which has the potential to renew the connection between policymakers and citizens. Citizens’ participation in policymaking is a crucial component of successful governance because it provides a new source of ideas, knowledge, and resources while also bolstering public confidence in the government. Complete, objective, and relevant information, defined consultation goals, and enough time and flexibility should all be part of the process.

The citizen, according to public administration theory and practice, is increasingly at the center of policymakers’ discussions, not just as a target, but also as an agent. The goal is to provide policies and services that are tailored to individuals’ needs and appropriate to their circumstances. Terms such as “co-creation” and “co-production” have emerged to reflect this systematic goal of ongoing collaboration among government agencies, non- government organizations, communities, and individuals.

(Non)transparency as a mirror of (ir)responsibility 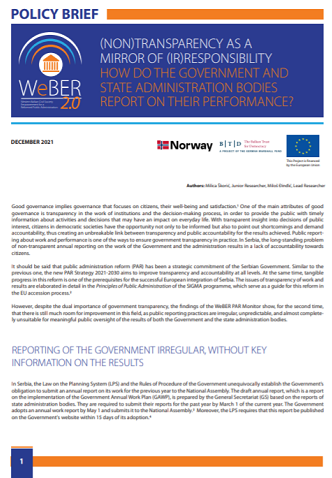 Good governance implies governance that focuses on citizens, their well-being and satisfaction. One of the main attributes of good governance is transparency in the work of institutions and the decision-making process, in order to provide the public with timely information about activities and decisions that may have an impact on everyday life. With transparent insight into decisions of public interest, citizens in democratic societies have the opportunity not only to be informed but also to point out shortcomings and demand accountability, thus creating an unbreakable link between transparency and public accountability for the results achieved. Public reporting about work and performance is one of the ways to ensure government transparency in practice. In Serbia, the long-standing problem of non-transparent annual reporting on the work of the Government and the administration results in a lack of accountability towards citizens.

The Brief can be downloaded here (in English) and here (in Serbian).

What do citizens tell us about administrative services? The second public perception survey in the Western Balkans

Public perceptions from four out of six countries in the Western Balkans suggest that state administration has become more citizen oriented in the past two years. Citizens throughout the region are increasingly aware of electronic access to administrative services, even though the COVID-19 pandemic has had a limited impact on using this type of access. Interesting country-level variations are noted in different aspects of the survey.