Government-citizen relations in Bosnia and Herzegovina: Representation through policy-making process 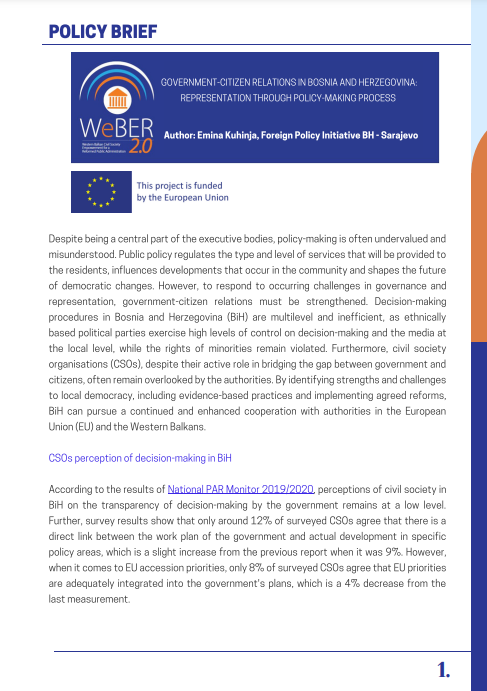 Despite being a central part of the executive bodies, policy-making is often undervalued and misunderstood. Public policy regulates the type and level of services that will be provided to the residents, influences developments that occur in the community and shapes the future of democratic changes. However, to respond to occurring challenges in governance and representation, government-citizen relations must be strengthened. Decision-making procedures in Bosnia and Herzegovina (BiH) are multilevel and inefficient, as ethnically based political parties exercise high levels of control on decision-making and the media at the local level, while the rights of minorities remain violated. Furthermore, civil society organisations (CSOs), despite their active role in bridging the gap between government and citizens, often remain overlooked by the authorities. By identifying strengths and challenges to local democracy, including evidence-based practices and implementing agreed reforms, BiH can pursue a continued and enhanced cooperation with authorities in the European Union (EU) and the Western Balkans.