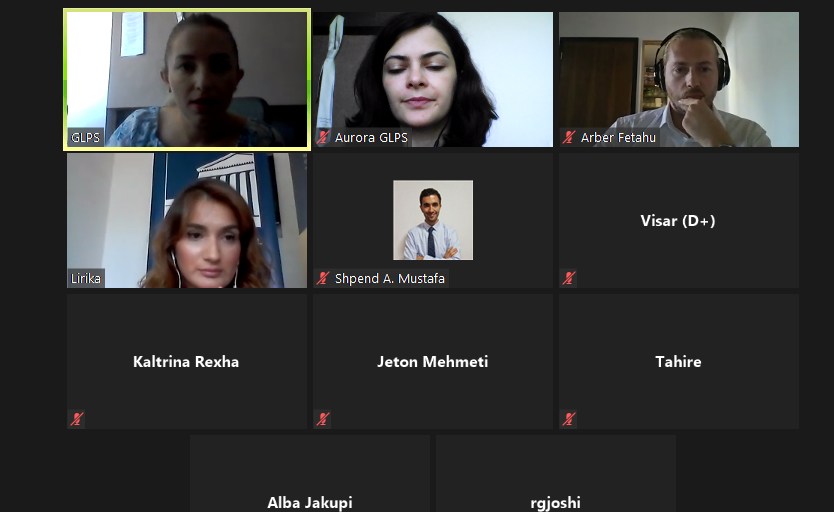 The Group for Legal and Political Studies (GLPS) from Pristina held a National Working Group Meeting on 24 July 2020 over Zoom. This NWG meeting was the first one of the WeBER 2.0 project.

The agenda of the meeting was divided in two parts: 1. European Citizens Consultations: An introduction and presentation of the method, and 2. Discussion on PAR priority topics. The agenda also consisted of announcing the WeBER 2.0 Small Grant Facility programme and a discussion about further steps.

European Citizens Consultations: An introduction and presentation of the method

The section about European Citizens Consultations (ECC) was presented by the researchers of the organisations Lirika Agusholli and Arber Fetahu, who participated in the Train of trainers (ToT workshop in May. Based on the presentation they introduced this method of consultations to the participants, discussing citizens’ engagement with the regulatory process, the principles and standards of consultations, and details about how the contributions of citizens will be taken into account.

At the second part of the meeting, GLPS’s executive director Arberesha Loxha continued the discussion about PAR priority topics. This section aimed to prioritise the objective of sustainable, efficient, transparent, and accountable public institutions. The priorities brought up in this meeting begin with the restructuring of the government, for which a public discussion should be necessary on the problems that the ministries are facing, taking into account the fact that within 6 months there have been 2 government restructurings in Kosovo. Colleagues from INDEP and D+ along with GLPS considered that we should send our comments regarding the Law on the Government, which incorporates a set structure of the government, a law that was absent for years in Kosovo’s legal framework. Other priorities listed as PAR priority topics were the need for proactive approaches from institutions in publishing information that contributes to transparency and encourages civic participation on issues of interest, as well as requests for access to public documents as another instrument, as PAR priorities that our public institutions should have. The discussion continued on to list public consultation and institutional transparency regarding the spending of public money, and spending based on the needs of citizens. The depoliticisation of boards and the selection of board members directors based on relevant legislation and professional criteria was another topic that was listed as a priority of PAR. Another priority should be developments in the legal package; legal acts (such as the Law on Salaries and the Law on Public Servants) should be based on constitutional principles (the judgments of the Constitutional Court for these two laws). GLPS encouraged the participants to use Loomio in order to vote and comment on priority topics to be placed in the platform, as well as to add anything they consider relevant or significant.

After these two points of the agenda, we informed participants about the launch of the WeBER 2.0 Small Grant Facility, for which the call for proposals will open in September, with info sessions regarding the application to be held in September and October.

After the two points of the agenda, we informed the participants for WeBER 2.0 Small Grant Facility programme announcement, informing them that the call will open in September and during Septemeber and October we will have info sessions regarding the application.

About the Author: Anesa Omeragic